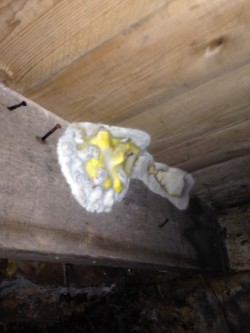 Dry rot is the most serious of the wood destroying fungi, spreading through masonry in its search for timber to destroy. It requires fast, specialist treatment because even when it is first detected, the concealed infection is often already well established. The spores of the dry rot fungus Serpula lacrymans, germinate in wood with an optimum moisture content of 20%. While removing the cause of the dampness will prevent wet rot from germinating (it requires a moisture content of 40% to 50%), dry rot may develop when the moisture level reduces, thus the infected area will then need fungicidal treatment. Fine greyish strands grow from its spores, spreading over and through timbers in a sheet of white or grey fungus. Fruiting bodies then form, producing a red dust of millions of spores to further advance the fungus. The wood it attacks becomes dry and brittle with cuboidal fractures, and can be easily crumbled by hand.

After a preliminary inspection, our trained Surveyors will prepare a detailed report and specification for the work of eradicating the outbreak. However, it may not be possible to determine the full extent of the fungal attack until exposure work has been carried out. This may involve removing floor boards, skirting boards and, if serious, plaster from the walls and ceilings.

To treat dry rot, it is not sufficient to just replace affected timbers due of the ability of the fungus to spread through masonry. The whole surrounding area of timber (potential food source)must be removed, floors taken up, panelling dismantled and plaster and ceilings cut away to reveal the full extent of the outbreak including a further one metre distance. We need to fully expose the area, as each strand of the fungus has a store of food material and can provide a source for a new outbreak. Infected masonry will be thoroughly sterilised with an approved fungicide, plaster replaced to special specifications and replacement timbers fully treated and isolated from the masonry onto which it bears. 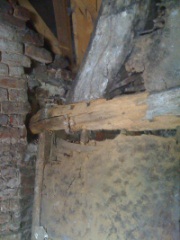 Woodworm is the generic name used for a variety of species of wood boring beetles which; if left to their own devices, cause structural degradation in structural timbers. Our specialist service will eradicate the woodworm infestation safely. The insecticides used are also suitable for areas used by bats (subject to an inspection of the site by the National Conservancy Council), which are a protected species in this country.

The wood boring beetles lay their eggs in open joints and crevices in timber and the larvae then feed on and bore through the timber, creating a network of tunnels which damage and weaken the structure. On completion of the larvae’s life cycle, which can vary from ten months for the Powder Post Beetle (Lyctus brunneus), to as long as ten years for the Death Watch Beetle (Xestobium rufovillosum) the beetle bores its way out of the timber to leave behind its characteristic flight hole. The most frequent infestations are the Common Furniture Beetle (Anobium punctatum), which attacks softwoods and hardwoods, mostly in sapwood, and the Wood Boring Weevil (Pentarthrum huttoni), which attacks softwoods and hardwoods, showing some evidence of fungal decay also.

Our surveyors will make a thorough inspection of a building to locate the areas of active infestation. This will probably involve lifting floor boards to various locations in order to inspect the structural timbers and also checking the roof timbers. In certain roof structures such as churches, this may involve the use of extension ladders or tower scaffolding. A comprehensive report and specification will then be prepared for the client.

Areas requiring treatment will be cleared of dust, building debris and timber fragments. Heavily infested timber will be cut out and replaced with new pre-treated timbers.

A fresh outbreak of flight holes does not necessarily mean that the beetle attack is only occurring at that one point in the timber, other larvae will have yet to pupate and emerge as beetles. Therefore, all of the timber in that location will be surface spray treated to ensure that eradication is complete.

A safe and effective treatment with a 20 year guarantee.

Wet rots are a common cause of structural defects in timber and there are number of species which attack timbers in buildings. They generally thrive on higher timber moisture contents than dry rot but do not spread through masonry and growth ceases when the moisture is eradicated.
Attacked timber is either darkened or bleached depending on the species responsible and is left in cuboidal or longitudinal cracks.

The species most commonly found is in buildings is Coniophora puteana (cellar fungus). Other species include Fibroporia vaillantii (mine fungus) and Phellinus spp.

The fruiting body of Elf Cup Fungus (Peziza) forms a small fleshy cup up to 50mm in diameter, it is commonly misidentified as Dry Rot fungi, as to the untrained eye it may look similar. The Elf Cup fungus is usually a pale buff colour on the upper side and white underneath.

The shape does depend upon the species but most are usually like a large soft pasta shell, when it dries out it shrinks and becomes hard and brittle.

This fungus may be found growing from almost any substrate including, plaster, brick and mortar, whilst this fungus does not decay timber its presence indicates very wet conditions, thus any timbers in the vicinity will be at risk to attack from true wood destroying fungi’s.

Only a qualified CSRT surveyor like Ian should be consulted to correctly identify the fungal species and if necessary, specify treatments.