Woodworm (generic term for wood boring beetles) is generally caused by four types of woodworm beetles resident in the UK. It is a common misconception that woodworm only affects old properties; in fact it can cause damage to newly constructed buildings as well as old.

Without treatment, woodworm can cause significant damage to the structure of a property and depending on the level of woodworm infestation; it can result in a property becoming structurally unsound.

What are the common types of woodworm which can be found in the North of England? This beetle attacks softwood species of timber leaving 1-2mm exit holes. It generally prefers damp, rather than dry wood and the grub will head for, and stays in, plywood for longer than any other timber.Common Furniture Beetle can be found in damp floorboards, damp loft timbers and old furniture where the polished finish has worn off, are good areas where the common furniture beetle can be found. The common furniture beetle lays its eggs on the timber and the grubs do the damage.

b. Death Watch Beetle (Xestobium rufovillosum)
The Death Watch beetle is a wood boring beetle approximately 7mm long with larvae growing up to 11mm long.To attract mates, these woodborers create a tapping or ticking sound that can be heard in old building rafters during quiet summer nights. They are therefore associated with quiet, sleepless nights and are named for the vigil (watch) kept beside the dying or dead with the superstitious therefore naming it the Death Watch beetle.The Death Watch beetle much prefers very damp conditions and which are improved when there is some kind of fungal decay such as “wet rot” in the timbers. The beetle needs these conditions to develop rapidly. The Death Watch beetle prefers European hardwoods, especially oak, ash and chestnut; that has been “softened” with dry or wet rot. The larvae tend to tunnel towards the centre of the timber resulting in damage that may be more extensive than is apparent from the exterior. In the UK, this species is concentrated chiefly in southern/central England. 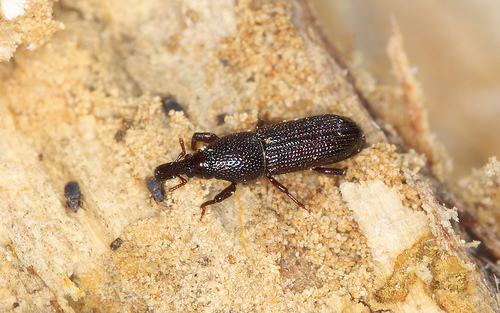 The Weevil as an adult is 2.5mm to 5mm in length, reddish brown to black in colour and have a long snout, a cylindrical body and short legs. The larvae are a creamy white C-shaped, wrinkled and legless.Damage is associated with damp and decaying wood, particularly timber already rotted by cellar fungus. Infestations can spread to adjacent healthy timber.

The Borer as an adult is 3mm to 6mm in length, red or chestnut brown with yellow silky hairs on body. Female lays 20-30 eggs in bark crevices which hatch into larvae in two to three weeks. Pupation follows in spring or early summer, lasting one or two weeks. Adults emerge between May and August.Damage is confined to unbarked softwoods, causing no structural damage. Occurs on pergolas, rustic work, fence posts and garden sheds.

2. How to spot if you need Woodworm Treatment

If you have noticed any of the following signs:

Then please ring our office on 0161 425 7595 to arrange for one of our CSRT (Certified Surveyor in Remedial Treatment) qualified Surveyors to inspect the problem at a time convenient for you, and to provide you with a detailed report and specification for any necessary treatments.