1. What Is Dry Rot (Serpula lacrymans)

Dry-rot fungus is often thought of as a building cancer, rampaging through buildings and rapidly destroying any timber in its path. The fungus, which thrives in moist unventilated conditions, will penetrate brickwork to get to more timber and can cause widespread destruction of structural timbers, skirting boards and door frames, and wood flooring.

In short, the fungus can be thought of as ‘living in masonry and eating wood’, and because the fungus thrives in damp, unventilated conditions, it can occur in the areas of a property that are not often seen, such as floor voids, or behind timber panelling, so damage may be extensive before the attack is discovered.

2. How can i identify Dry Rot:

Initially the fungus appears as off-white felt-like or cotton-wool like sheets on brickwork and timber, and, in later stages, can develop fungal strands as thick as your finger. Where the fungus is exposed to light, it often has a lemon-yellowish tinge. 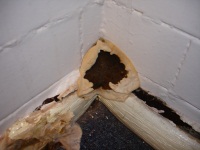 Damage is often confined to timber but large flat mushroom-like fruiting bodies can easily grow through finishes such as plaster or paint. These fruiting bodies may be the first visible sign of a problem, and they produce numerous spores which are normally brick-red in colour.

Entirely dry-rot decayed timber can be crumbled between your fingers. The fungus leaves deep cracks running across the grain, and there is often evidence of off-white sheets of the fungus on the wood.

3. How Can Dry Rot be treated:

Treating dry rot can involve removal of the affected timber (including all timber for a metre beyond the visible signs of the fungus), and extensive chemical fungicide treatments for all adjacent timber and the masonry of any contaminated walls and plaster.

An alternative approach is to use environmental controls, such as isolation and ventilation, which ensure that the damp, unventilated conditions required by dry rot do not occur. The techniques are simple ways to ensure that the timber in a property does not become damp enough for dry rot to attack, for instance replacing dry rot decayed joists with new timber using joist hangers, instead of building them back into the brickwork, or by using ventilated skirting board details to encourage ventilation of a floor void.

Replacement door frames should have a strip of damp-proof membrane around the outside, to fully isolate them from damp or potentially damp masonry, so the timber would never become damp enough for the dry rot fungus to consume. In all cases it is essential that the moisture source responsible for the outbreak is permanently eradicated.

If you suspect you may have a dry rot outbreak, it is best to have the problem looked at by a CSRT Qualified Surveyor as Ian is, and then corrective action can be taken by a reputable specialist company such as H2O Remedial Services, a CGS Insuranced Backed guarantee can then be issued on any specialists work, that is deemed to be necessary, giving you the customer total peace of mind.